Our plan for the day was to explore Chicago a bit – maybe see Millennium Park and the Navy Pier – then check out University of Notre Dame in South Bend, Founder’s Brewery in Grand Rapids, and make our way towards upstate Michigan.  Once on the highway though, we thought of seeing Wrigley Field, too, and checked to see if the Cubs were in town. 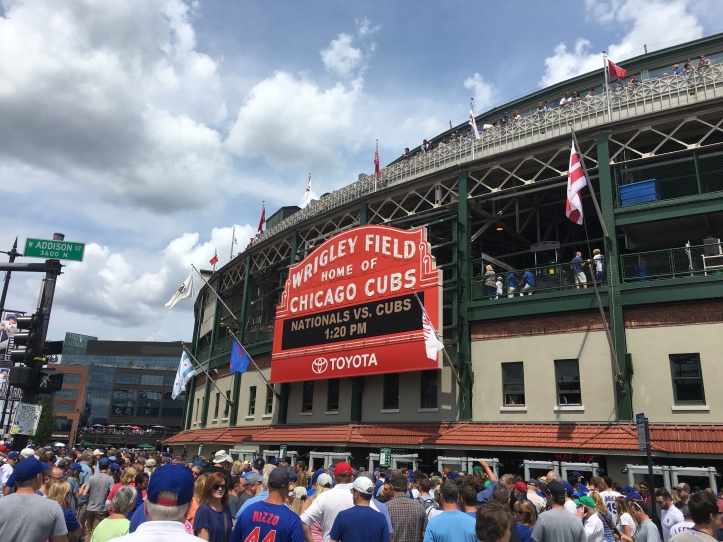 They were – and playing the Nationals no less!  We weren’t sure about parking, but found an empty curb spot in a nearby neighborhood.  The area said “Resident Permit Required” but added it was a “Tow Zone” from 5 PM to 10 PM.  Given that we were there at 11 AM, we asked a guy who was parking nearby for clarification.  Before Patrick even got the question out, Alex (the guy, we became buds) was offering us a 24-hour “Guest Pass” that would allow us to park where we were without issue.  Score!

On the ticket front, we were having no luck finding anything on StubHub – at least nothing affordable for a spur-of-the-moment adventure – so we decided to just talk with the Ticket Office.  We landed a pair for Standing Room Only!

With tickets in hand, we made our way to HVAC Pub for a pre-game pizza and beer.  Sadly, it wasn’t a Chicago-style deep dish pie, but rather just a regular ‘ole pizza. (Maybe we shouldn’t have assumed it would be deep dish just because we were in Chicago?)

Wrigley Field is currently the second-oldest ballpark in the majors — only two years younger (est. 1914) than Fenway Park (est. 1912) — and so has many of the idiosyncrasies of an old-style park.

Specifically, unlike many “newer parks” (starting with Camden Yards and continuing after – check out this great podcast on baseball park design), Wrigley Field does not have large “open” concourses where you can see the field while also getting your food.  The lack of these open concourses makes it difficult for those with “SRO” tickets to just mill about and still watch the action, so we decided to just pick seats and move when necessary.

First was up behind home plate.  We managed to enjoy these seats for a couple innings — and saw lots of runs — until the rightful group arrived and claimed their spot.

We took the opportunity to refill our drinks – no more Old Style at Wrigley, so we had to make due with Corona – and moved down the third-base line where a woman mentioned she had two extra tickets and we could sit and some empty seats by her without fear of having to keep seat-hopping.  Thanks, Random Stranger! 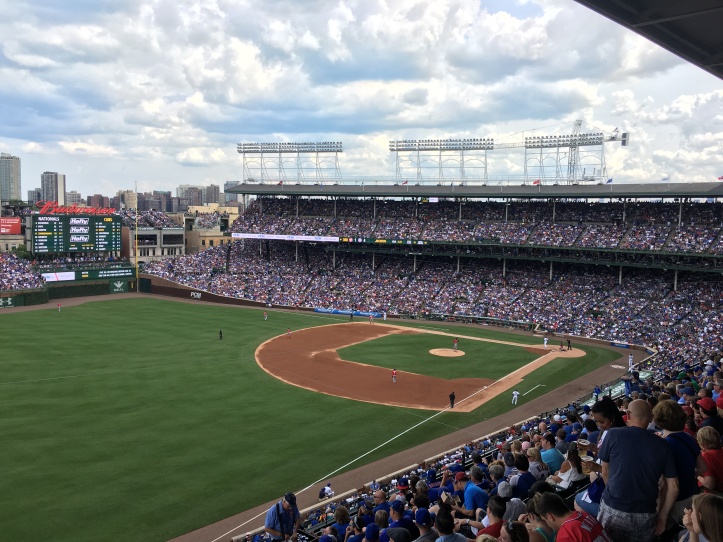 After about the fifth inning — having seen tons of scoring and knowing we still had about five hours of driving ahead of us (plus a time-zone change!) – we scadoodled back to the truck but not before catching a picture with Clark the Cub and his giant World Series ring.

On the road again, we encountered toll plaza after toll plaza.  Nearly $13 just to get out of Illinois and through Indiana!  With the impromptu stop at Wrigley, the Notre Dame and Grand Rapids plans had to be thrown out, and we made our way straight to “Lucky Lake Campground” in Montague, MI.  After crossing north into Michigan (new state!), we were surprised to see the time jump forward an hour.  We hadn’t really been paying attention to time zones and so this was an unwelcome surprise as we now had a whole hour less of sunshine than we thought.

We arrived at the campground as the sun was setting, and were a bit taken back by what we found.  The check-in office was just another camper, set up at the entrance, and their “hot showers” were just a faucet in a random three-sided closet off to the side.  Interesting for sure.

The actual sites, however, were very nice.  We had a lot of choices as it was not crowded and picked one of the many lake-side sites that didn’t have cattails blocking the views.  We set up Turtle and hung around the table for a while – blog writing, uke playing, beer drinking – till we decided to head to bed.

Tomorrow we have a short trek up to Leland to meet with Patrick’s coworkers who are on their family vacation.  A day on the lake looks to be in the cards! 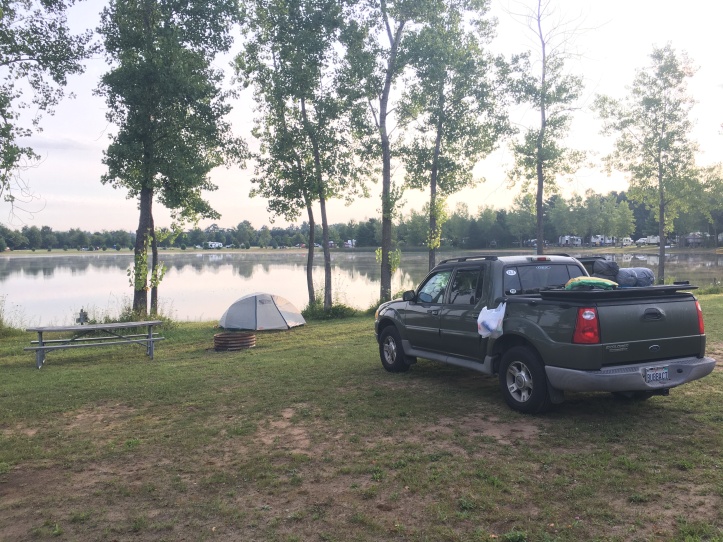